Come, Stay, and Enjoy Your Day: Sex Trafficking and Franchisor Liability Under Section 1595 of the Trafficking Victims Protection Reauthorization Act

When Police Volunteer to Kill 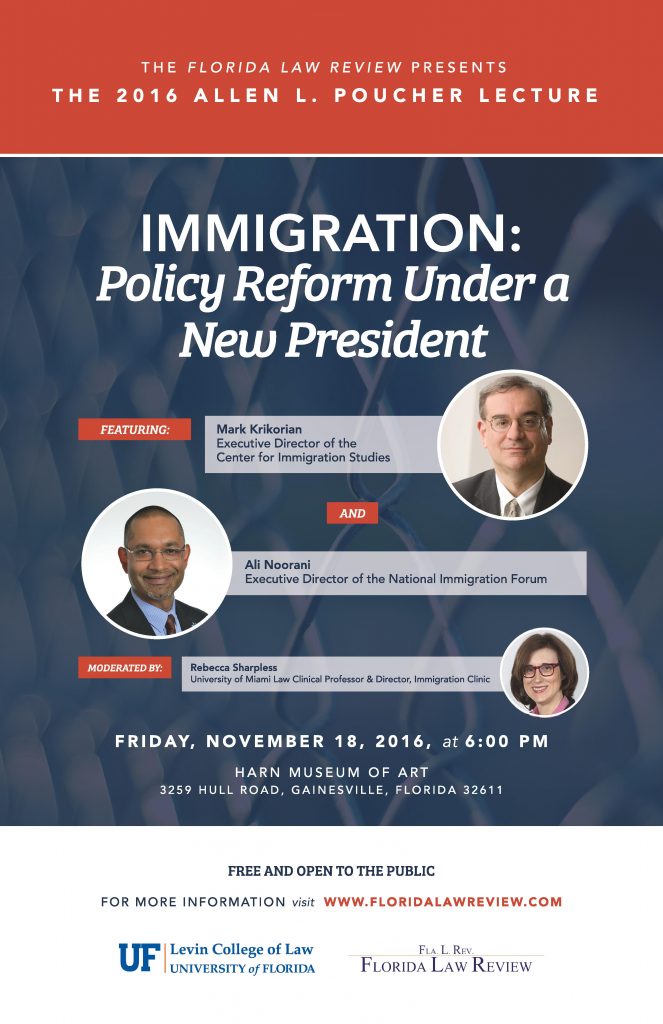 The current election has raised many questions regarding the proper route to take in terms of policy surrounding immigration. With one candidate promising deportation and a wall, and another candidate promising a path to citizenship, our country has never been so divided on the issue of immigration. This year, the Poucher Lecture will occur only ten days after the Presidential Election. Our distinguished immigration experts will discuss the realities of immigration policy reform and what reform may look like under the newly elected President.

“Immigration: Policy Reform Under a New President” will be held Friday, November 18, at 6:00 P.M. at the Harn Museum of Art, located at 3259 Hull Road, Gainesville, Florida 32611. The lecture is sponsored by the Allen L. Poucher Legal Education Series and is presented by the Florida Law Review. The lecture is free and open to the public. Free parking will be available at the Phillips Center parking garage as well as in the parking lot in front of the Harn Museum.

Media inquiries can be directed to Florida Law Review Executive Symposium Editors Cayman Weimer and Ashlyn Robinson at press@floridalawreview.com or at 352-273-0670.

For more details or to submit a question to the panelists, please visit the Florida Law Review’s website at www.floridalawreview.org or contact the office at 352-273-0670.

Mark Krikorian, a nationally recognized expert on immigration issues, has served as Executive Director of the Center for Immigration Studies (CIS) since 1995. The Center, an independent, non-partisan research organization in Washington, D.C., examines and critiques the impact of immigration on the United States. Animated by a pro-immigrant, low-immigration vision which seeks fewer immigrants but a warmer welcome for those admitted, the Center was established in 1985 to respond to the need for reliable, fact-based research in the immigration area.

Mr. Krikorian’s knowledge and expertise in the immigration field are sought by Congress, as well as the mainstream and new media. He frequently testifies before Congress and has published articles in numerous outlets including The Washington Post, The New York Times, Los Angeles Times, and Commentary. He is a contributor at National Review Online, and has appeared on 60 Minutes, Nightline, NewsHour with Jim Lehrer, CNN, and NPR, among other television and radio programs.

Mr. Krikorian addresses a variety of audiences on a multitude of immigration topics. In addition, Mr. Krikorian is the author of the books The New Case against Immigration, Both Legal and Illegal and How Obama is Transforming America through Immigration.
His most recent publication is Open Immigration: Yea & Nay, co-authored with Alex Nowrasteh of the Cato Institute.

Mr. Krikorian holds a master’s degree from the Fletcher School of Law and Diplomacy and a bachelor’s degree from Georgetown University. He spent two years at Yerevan State University in then-Soviet Armenia.

Ali Noorani is the Executive Director of the National Immigration Forum, an advocacy organization promoting the value of immigrants and immigration. Growing up in California as the son of Pakistani immigrants, Ali quickly learned how to forge alliances among people of wide-ranging backgrounds, a skill that has served him extraordinarily well as one of the nation’s most innovative coalition builders.

Before joining the Forum, Ali was executive director of the Massachusetts Immigrant and Refugee Advocacy Coalition, and he has served in leadership roles within public health and environmental organizations.

In 2015, Ali was named a lifetime member of the Council on Foreign Relations. He holds a Master’s in Public Health from Boston University and is a graduate of the University of California, Berkeley. Ali lives in Washington, D.C.

Professor Sharpless joined the University of Miami School of Law faculty in the fall of 2009 and directs the Immigration Clinic and teaches immigration law. She researches and writes in the areas of progressive lawyering, feminist theory, and the intersection of immigration and criminal law.

Professor Sharpless speaks widely on immigration law, including at events such as the annual conference of the American Immigration Lawyers Association. She is a board member of the South Florida Chapter of the American Immigration Lawyers Association as well as a longstanding board member of the National Immigration Project of the National Lawyers Guild. Immediately before joining the School of Law’s faculty, she was a Visiting Clinical Professor of Law at Florida International University’s College of Law, where she taught in-house clinics in the areas of immigration and human rights and a doctrinal course on immigration law. From 1996 to 2007, Professor Sharpless was a supervising attorney at Americans for Immigrant Justice (formerly Florida Immigrant Advocacy Center), where she engaged in extensive litigation on behalf of low-income immigrants as lead counsel in cases before the United States Courts of Appeals and United States District Courts as well as in immigration court and before the Board of Immigration Appeals. She has received awards and recognition for her work.